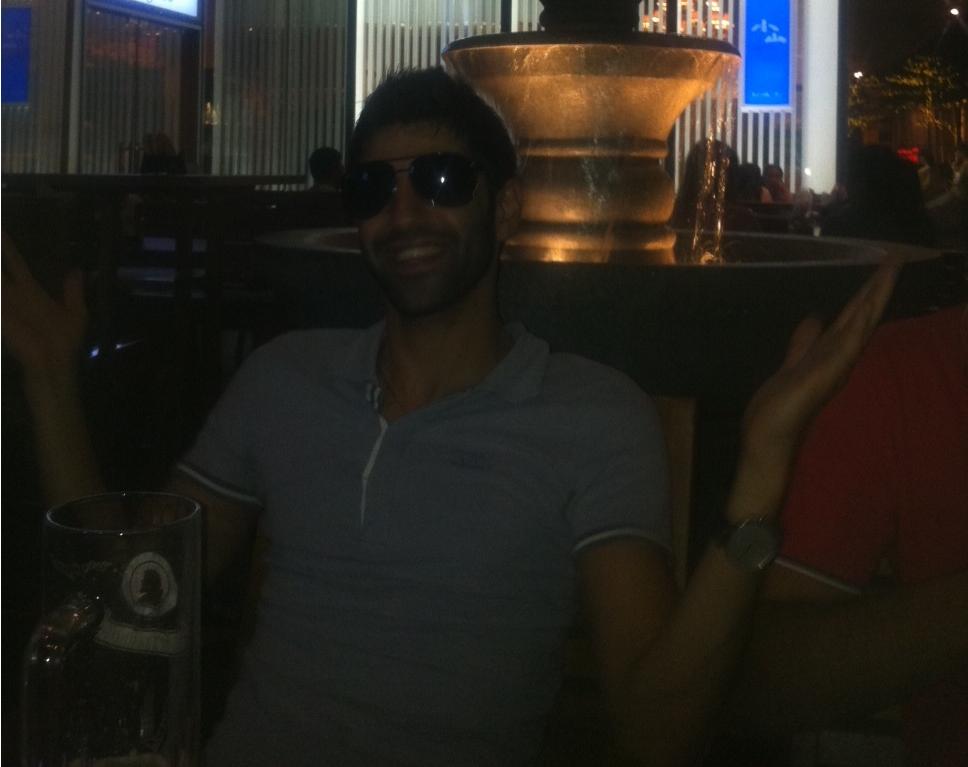 This is a short introduction to a friend of mine who, having been in china only 2 years, is making a real name for himself in the mobile phone market. From the country of Lebanon please say hello to Bilal Hindi.

I hope this little article gives you guys some inspiration and a real insight as to just what is possible from China.

I met Bilal during my second week in China, a quiet and unassuming guy that we started chatting to at a club in Guangzhou. Little did I know what a great friend and help he would become to me in China.

Some of you might remember this photo from early on in my blog, Bilal is second from the right. (To this day I’m not sure who the guy at the back popping his head into the shot is) 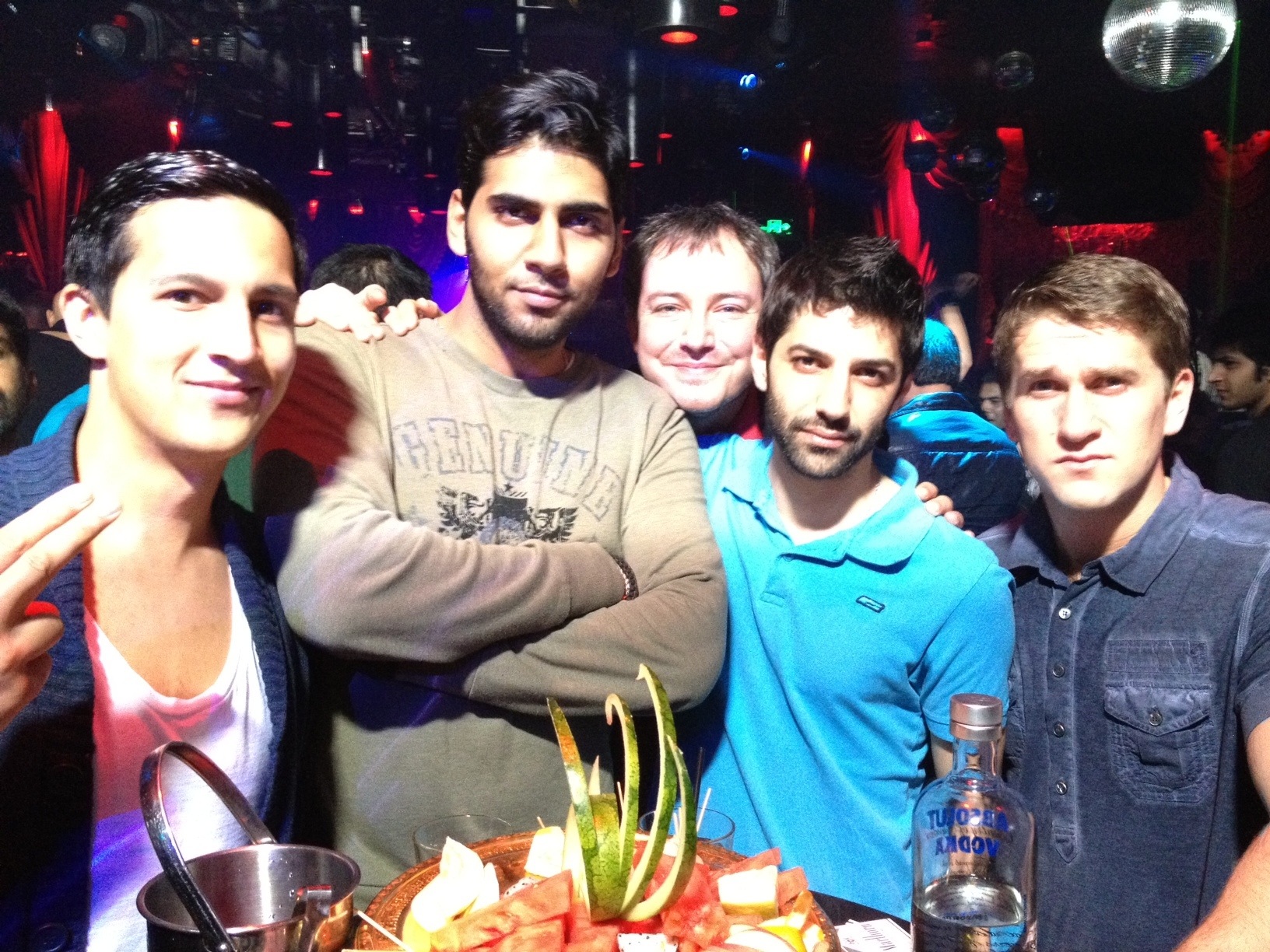 Bilal is what I can only describe as a unique guy. I have met a lot of people in business but none quite like him. Undoubtedly laid back, educated and street wise with a real zest for life, he is just the kind of guy you need to be around in a place like China. His strangest attribute work wise has to be his work hours pattern.

With his primary market being Brazil he is constantly working on a 12 hour time difference. I’m usually on a 7 hour time difference and for me that’s hard enough. For Bilal more often than not he is up at 11 am to visit suppliers and check shipments before we meet up for the gym and dinner at around 5pm. He then works from 7pm till 4am talking with his customers and confirming orders. Hectic right.

Bilal moved here less than 2 years ago from his home country of Lebanon looking for a way to make a real difference to his life. Having previously  studied computer engineering at university he is notably an academic but struggled to find a secure career in Lebanon.

After graduating Bilal enrolled into a placement program looking to forward his career. He describes this as a slow and frustrating 5 months of completely unpaid work which he could not see moving in the direction he wanted to be going in. With the instability of his home country the other job opportunities he faced were only offering wages circa 1000 USD per month, Bilal felt he was worth more. He was certainly dreaming big. 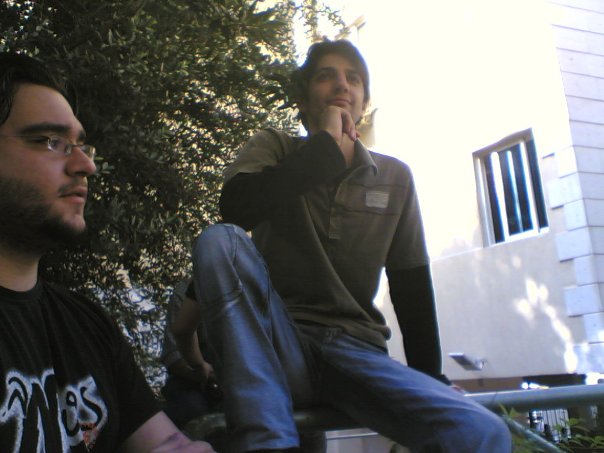 He decided he would go to Brazil and follow in the footsteps of his two uncles and begin his own business of international stock trading. With this in mind he left his job and began making preparations. He was not sure what he would do there but decided he must take the chance.

However one night over dinner, while one of his uncles was visiting, he was asked if he would like to visit his uncle in China to see if there was any opportunity for him there and frankly he grabbed it with both hands, feet and his teeth. He has not let go of it since.

He spent the first 3 months or so living in a hotel directly next to the offices and warehouses of some of the main mobile phone dealers here in Guangzhou. Then he spent another month living in a hotel in Shenzhen before returning to the same hotel in Guangzhou for another month. He spent this time researching the market from the ground up. Finding suitable models, forging relationships with suppliers and building rapport with new international customers.

After he could see some real scope here Bilal committed to an apartment lease and moved here long term. Now, from his modest home office using a laptop he has had since he came here, he speaks to a small but serious group of buyers negotiating orders in numbers we all dream of. 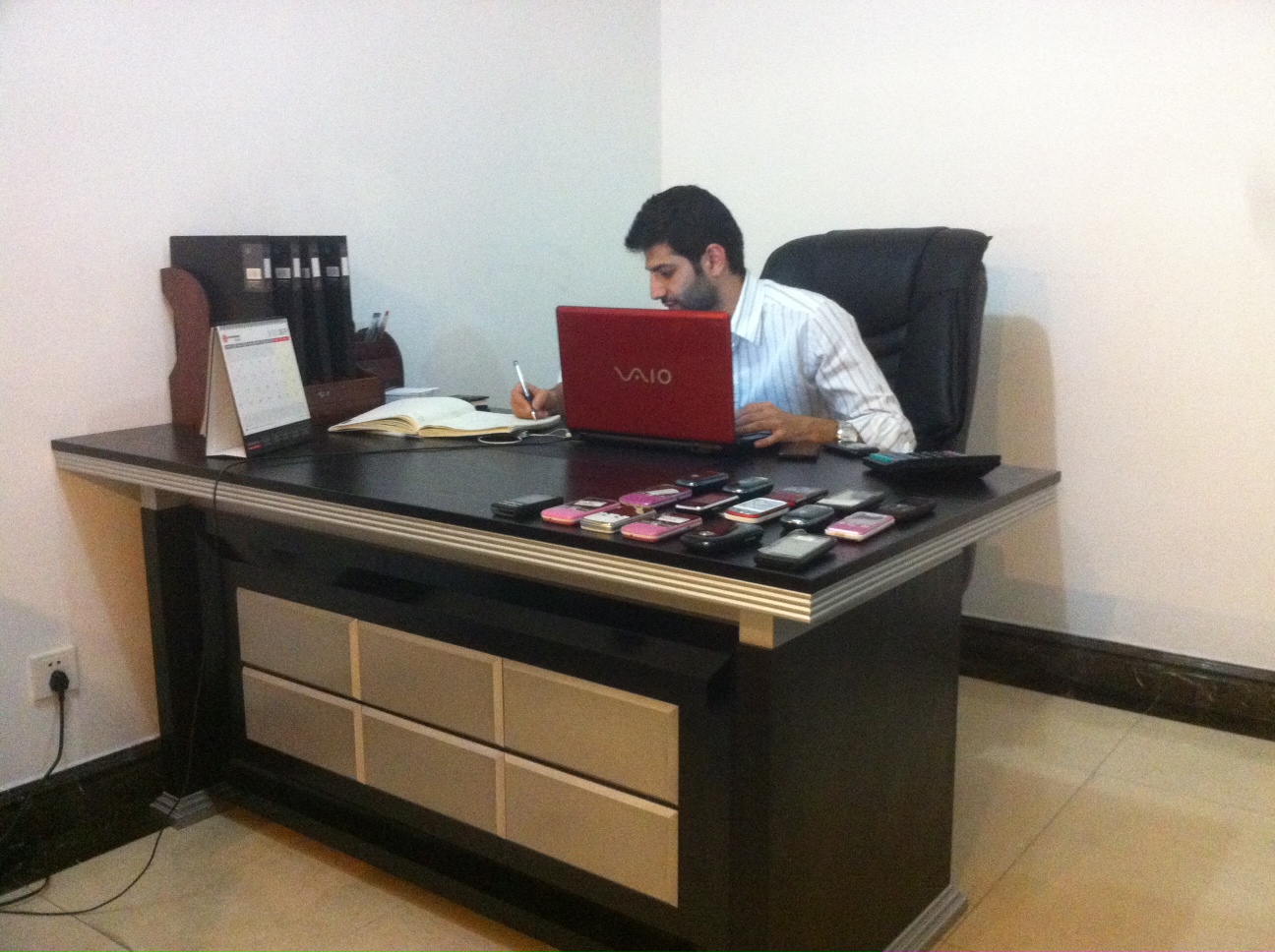 Bilal relies on low margin but very high volume turnover so has to understand something the Chinese seem to struggle with. The importance of customer service. Bilal spend hours every day talking to his customers, meeting their concerns and easing the importing process for them. There is no fancy talk with him and no tall tales, your dealing directly with a guy here who will do what he says and by all accounts his customers like the way he does business. Some of them have seen unprecedented increase in there sales and productivity since working with Bilal.

From off the shelf models to some bespoke mobiles Bilal allows his customers to concentrate on the selling by tidying up the loose ends for them here. Sure sometimes production delays can run from days into weeks but what’s important is that Bilal offers his customers a secure point of contact they know can be relied upon.

Like any business he has faced some ups and downs, made some great deals and also made some losses. Most notably for me and perhaps a insight into Bilal’s character is a loss he faced just a Month ago when he had to abandon plans to open a restaurant here due to complicated staffing issues. It was a hard thing to take as he was really excited about the venture and had committed a large sum of money to it already, no moaning though and no excuses. He made a decision to cut his losses and move forwards.

That same day he called his phone supplier, explained the situation and said that they had to get everything slick at there end because he needed to ramp sales up that week to cover the losses from the restaurant. By working like only Bilal can and pretty much not sleeping for a week he did it. When conditions allow I am sure he will reignite that project but for now he will concentrate on the mobile business. He bought himself a new Mercedes after that week to cheer himself up, alright for some…….. 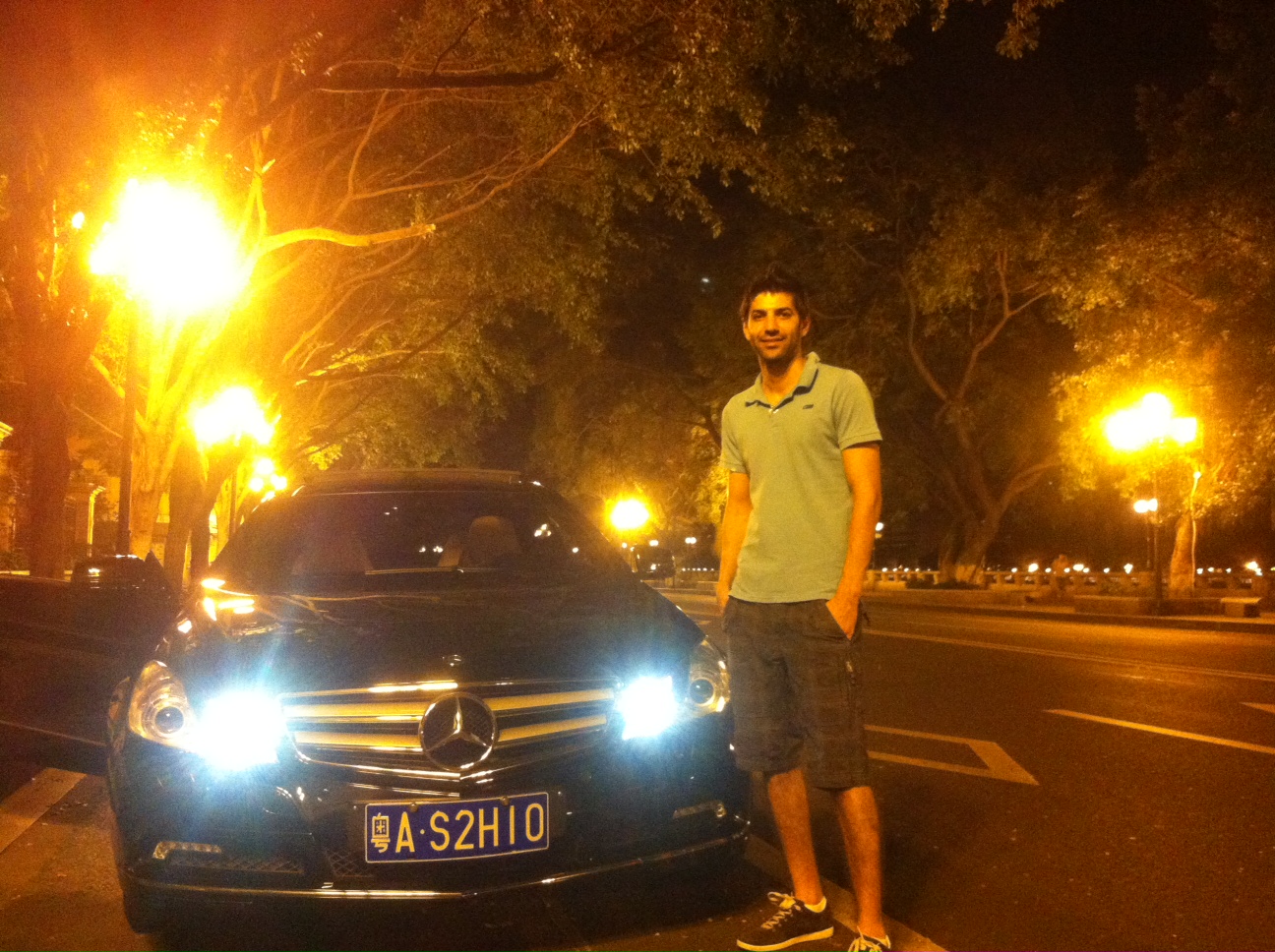 I really feel that Bilal has what it takes to succeed, not only in China but in life. He wants to do well, he needs to. On a level that not doing so is not an option. Is this kind of drive and ambition that you need in any aspect of success but in an environment like China it is absolutely essential. Working long hours are pretty standard when you work for yourself but here it’s very different. With customers having so many demands you have to spend a lot of time with each one, I think sometimes a few of mine think they are only customer I have, ha ha.

It’s fair to say that you have to work nearly all the time here, everyday and pretty much all the time when we are awake we are working. Technology makes this possible through whatsapp messenger, email on our phones/iPads and Skype. Be it in the gym or in the car on the way to a factory, If we are awake we are working. More often than not I will be sat having dinner with Bilal and we will just be talking on our phones to our respective customers via the various messaging applications we use. Sounds kind of sad to put it on paper like that but then after all, we came here to work.

He has no staff, he says there is no need and he would rather do it himself, yet he sells mobile phones by the thousand week in week out all to very satisfied repeat customers. Those of you wanting to know how to successfully export from China could learn a lot from a guy like Bilal.

At 29 years old with a good business and solid customer base Bilal  feels he will stay in china for many years to come. He says living here can be hard, it’s very lonely at times and the cultural difference is something I don’t think any foreigner can ever fully adapt to. I think the only way you can motivate yourself in these conditions is to remember that to be truly successful you must live a few years of your life like others won’t so you may live the rest of your life like others can’t.

Bilal came here with little to nothing. It’s one of those ironic story’s that you hear and he often jokes to me that he came here with 50 dollars in his pocket. I think he’s telling the truth too.

When I first moved here I would see hundreds of cartons of mobile phones being loaded into Trucks all day everyday. Thousands of units, hundreds of thousands of dollars. I used to think to myself wow I wonder which company is shipping stuff like this, well it’s not just big fancy offices, its guys like Bilal.  I just don’t think there are that many like him about.

All the best to you Bilal, your a true entrepreneur and a great friend.

38 thoughts on “Making it in China”