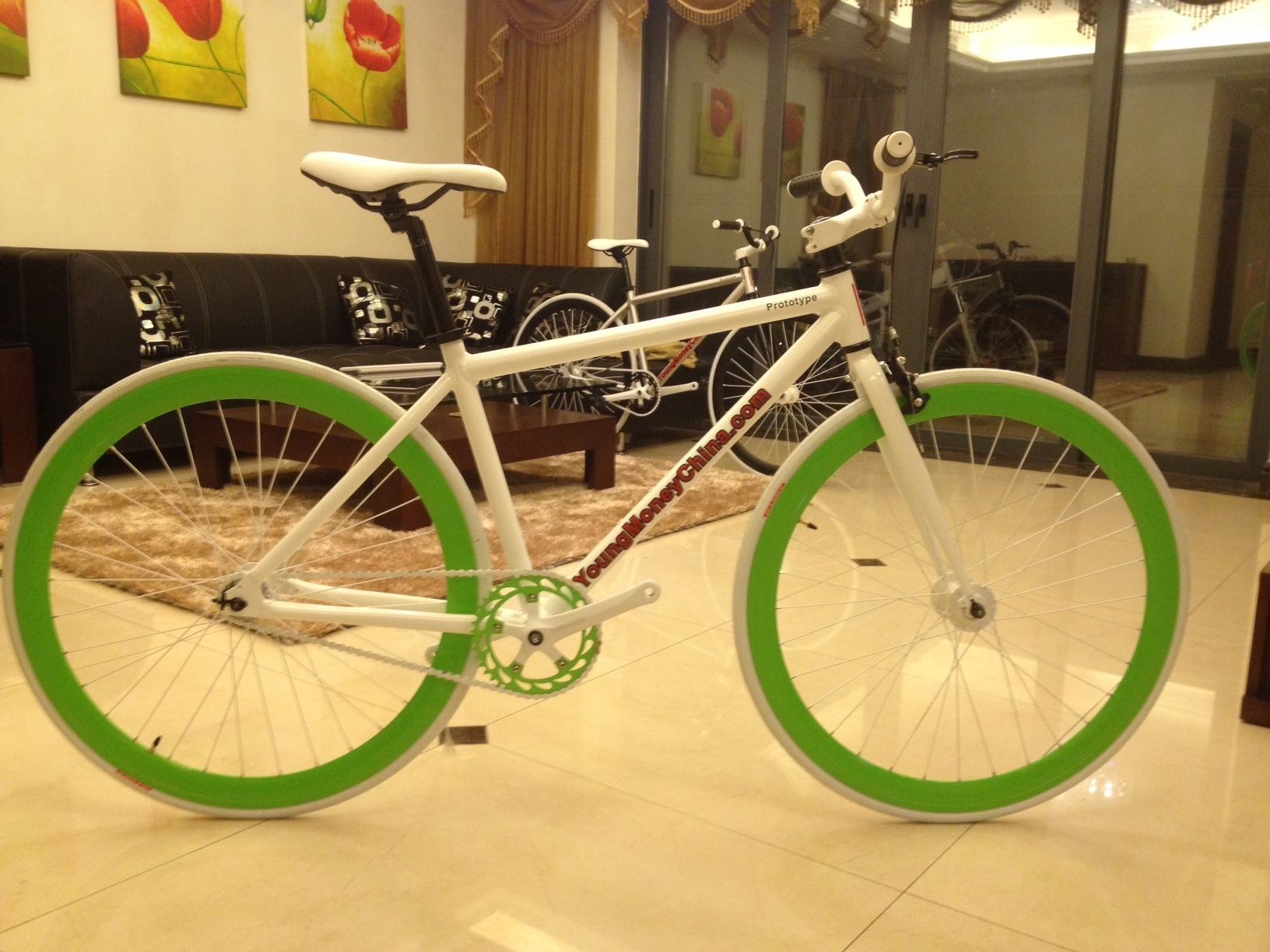 So the fixed gear bike is coming along, it’s been a tricky one because of quality control issues butting up against my efforts to keep this bike close to the £220-50 mark at retail. But so far the bike looks pretty dialled.Those of you new to the blog might want to read this post here or you perhaps wont know what im talking about;

I have been up and down with this product from a very basic steel framed entry model with unsealed bearings and budget cast cranks which i could have retailed for about £130 – I feared though that i would perhaps have had a few sleepless nights worrying about potential returns as some of the components were a bit too cheap. To almost going all out on a gorgeous bike with cnc’d components that is now being manufactured for a new bicycle brand but will retail at almost £400. Both of these were pretty viable options but in my experience the market is flooded with cheap poor quality bicycles and higher end models are becoming difficult to move on. I have really been round the block on this one but I have the first prototypes in my front room ready to cause some big trouble in little China. 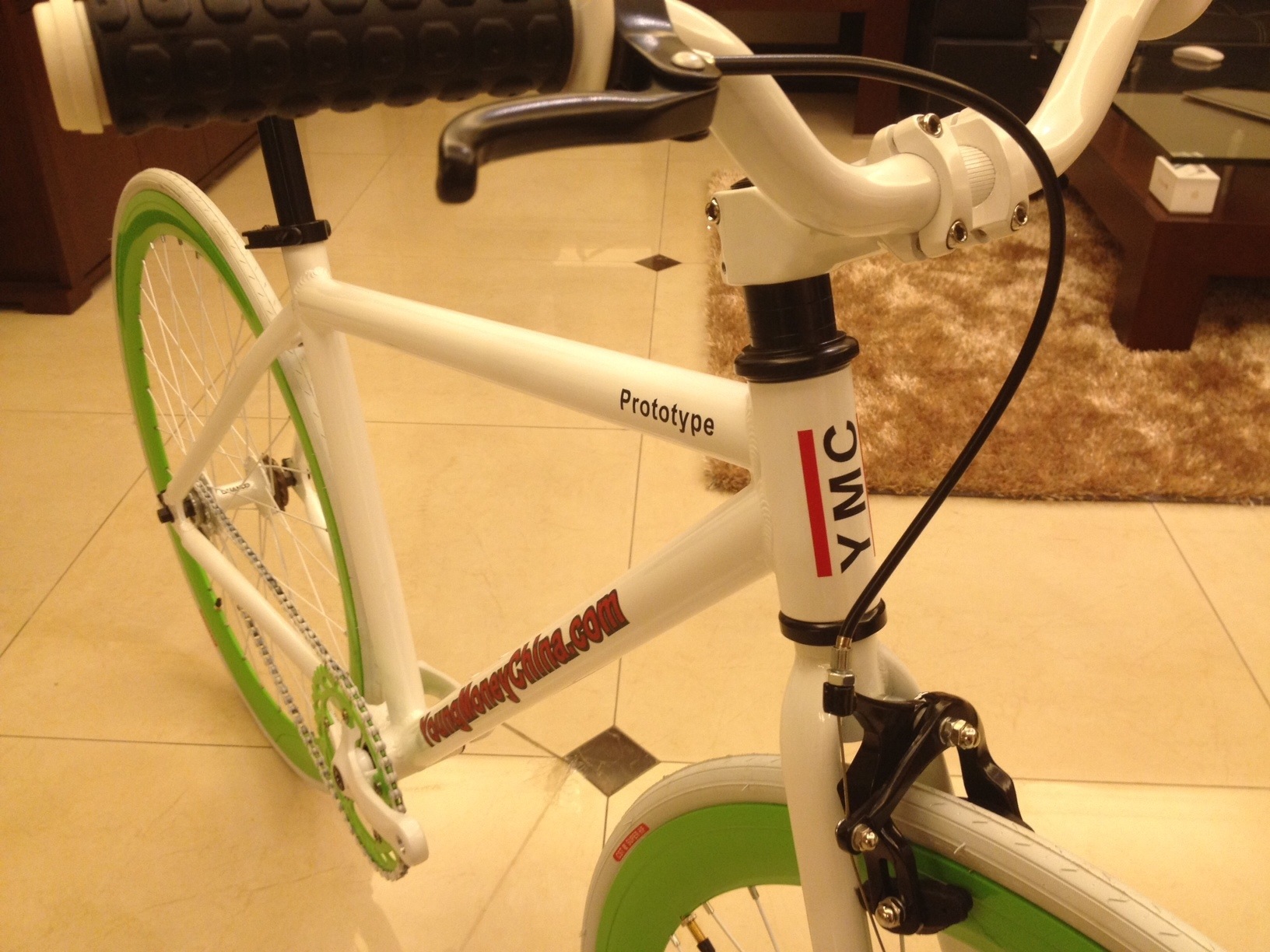 As you can see these bikes are exactly what they need to be for a £220ish price point. Nothing amazing but bang on trend in design and colour options, built with good quality components, fitted with sealed bearings where it matters and the odd trick component where I know the consumers look. On the subject of paint that’s a pretty big issue with cycle manufacturers here as when you want to shave off a bit of the costings a good quality powder coat finish is one of the first things to go. My frames are aluminium to keep the weight down and add a little usp. With this in mind i opted for a clear coat lacquer finish on one of the models, I did this in the past on a mountain bike frame I imported and it proved popular as the welds look great. I also went for powder coating the rims as the cheaper paint finishes came off after a few rides due to rim flex and spoke pulling.

I had some funny experiences talking to bicycle factories about lower end fabrication of frames. I found a frame that I really liked the look of and was keen to do something with. It was a twin top tubed aluminium frame that bowed out, looked really nice. When you stood over the top tube though the bow was not consistent on either side. The frame was basically bent to one side. The factory owner said simply that this frame is for the Chinese domestic market and that Chinese customers are not too bothered about things like this. I decided that this was not to be an area I wanted to scrimp on. I saved some money however on the chainring, ditched the alloy fork and went for a mid range headset and hubs. I used this money on the nice deep v rims, sealed bottom bracket bearings, quality crank arms and powder coated components. 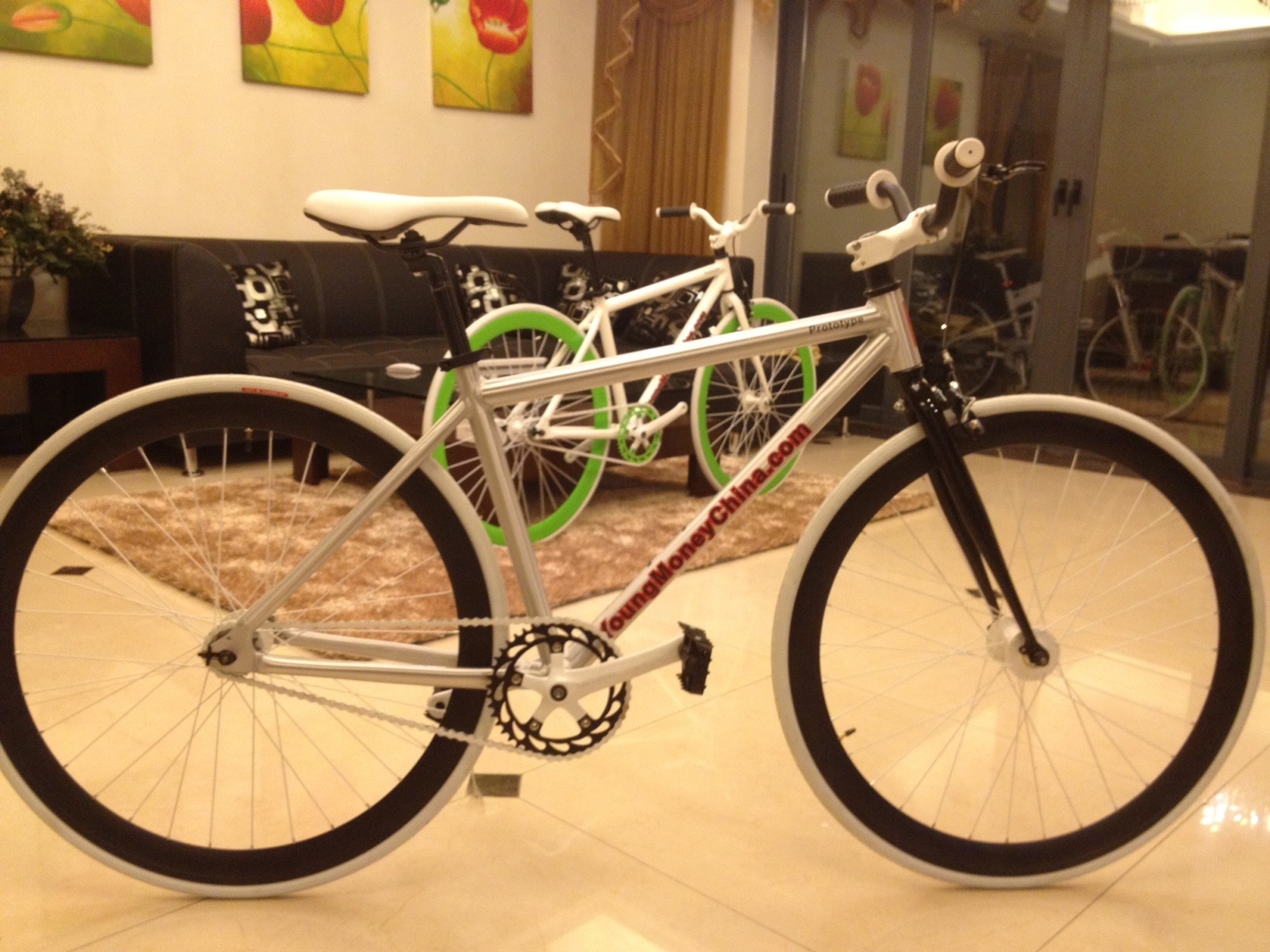 These parts are available in China if you look hard enough and the pricing is acceptable if you are relentless with your negotiations. There are similar bikes here for sure, there is a phrase the chinese use here – “Same same but different”. Thats pretty much because they copy the aesthetics of products so much from each other that it all kinda looks the same but the details are usually different and actual quality variations are huge.

So far this bike, or more to the point the factories and suppliers required to build it has taken 4 people in China almost 6 weeks to get to this stage. I have had to hire in help and test a lot of bikes, I could NEVER have don’t this kind of thing from behind my PC in the UK and many 2 week trips abroad to various countries have not managed to get me anywhere near as deep into the process as this has. 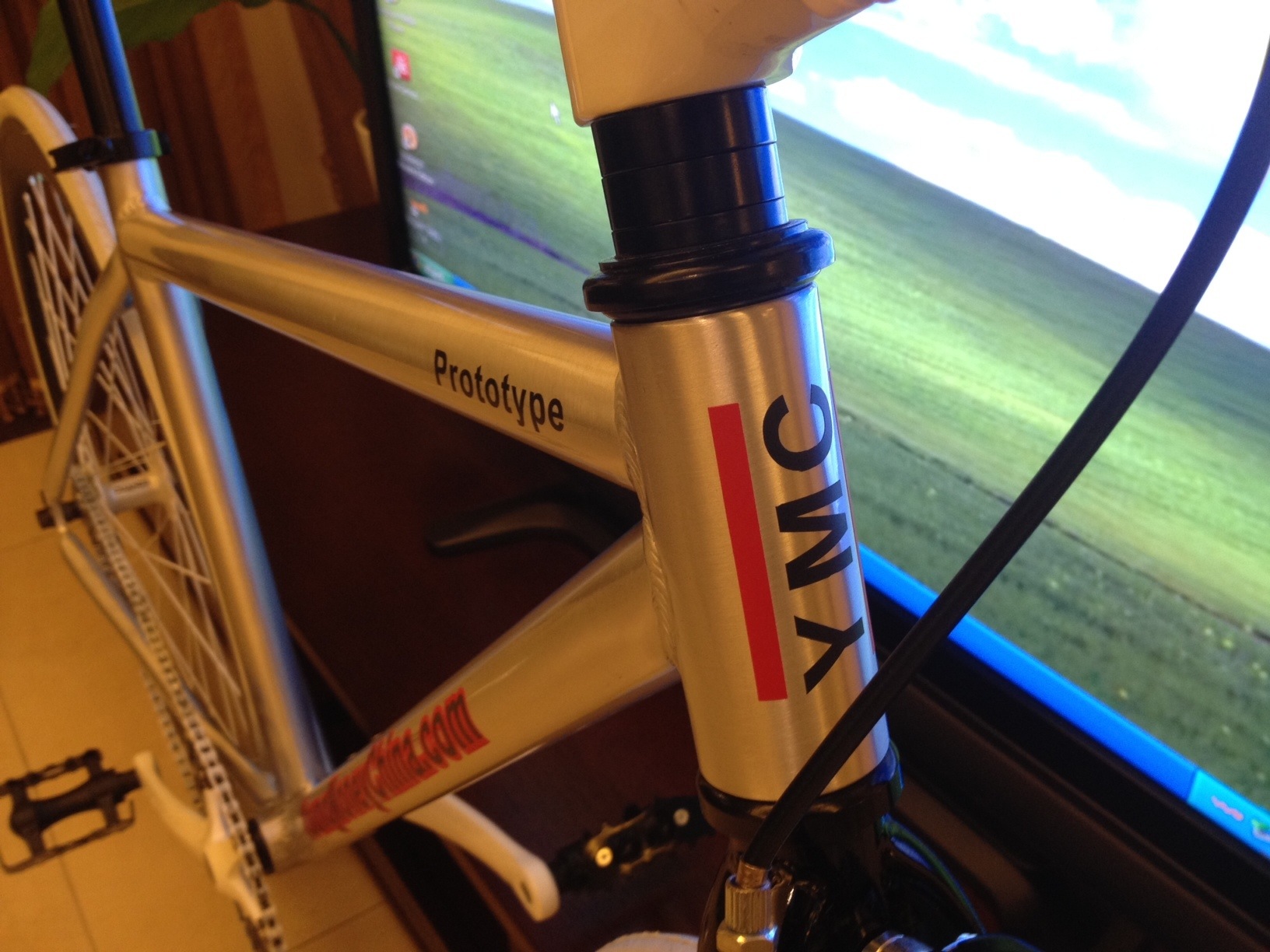 As you can see its still a “prototype” ha ha… Very serious…. and I already know of things I want to change, I wanted a low slung top tube on the frame kinda like a mountain bike for stunts yo! But I think it could maybe do with being a bit taller? Any feedback? Maybe i will end up going for a more premium sealed bearing hub but im pretty confident these will stand up through my testing, lets see. The bikes also won’t be branded with my blogs URL but it amused me getting the samples with that on so there you go.

Oh yes the keen eyed of you may notice I have some mountain bikes too but they are quite a bit away from English eyes for now.

At the end of the day it’s just a bike, nothing here I have invented or anything exciting like that but I know bikes and I know margins, this is a good bike with good margins so I’m very happy so far.

Sorry to make this an entirely bicycle trade related post but I just have a little more to share with you while we are on the subject.

I met a guy earlier in the week from a province about an hour from me. He was running a business with his brother selling bikes online and on the Chinese equivalent of eBay. These bikes are all pretty low to low mid quality products obviously all made in china but he was really shifting them, I was blown away by the operation. There was perhaps 12 guys constantly prepping and packing bikes with 4 taking the phone/email orders. Don’t get me wrong I have been to the hq of the biggest online cycle retailer in Europe and that’s impressive but this was impressive for different reasons. 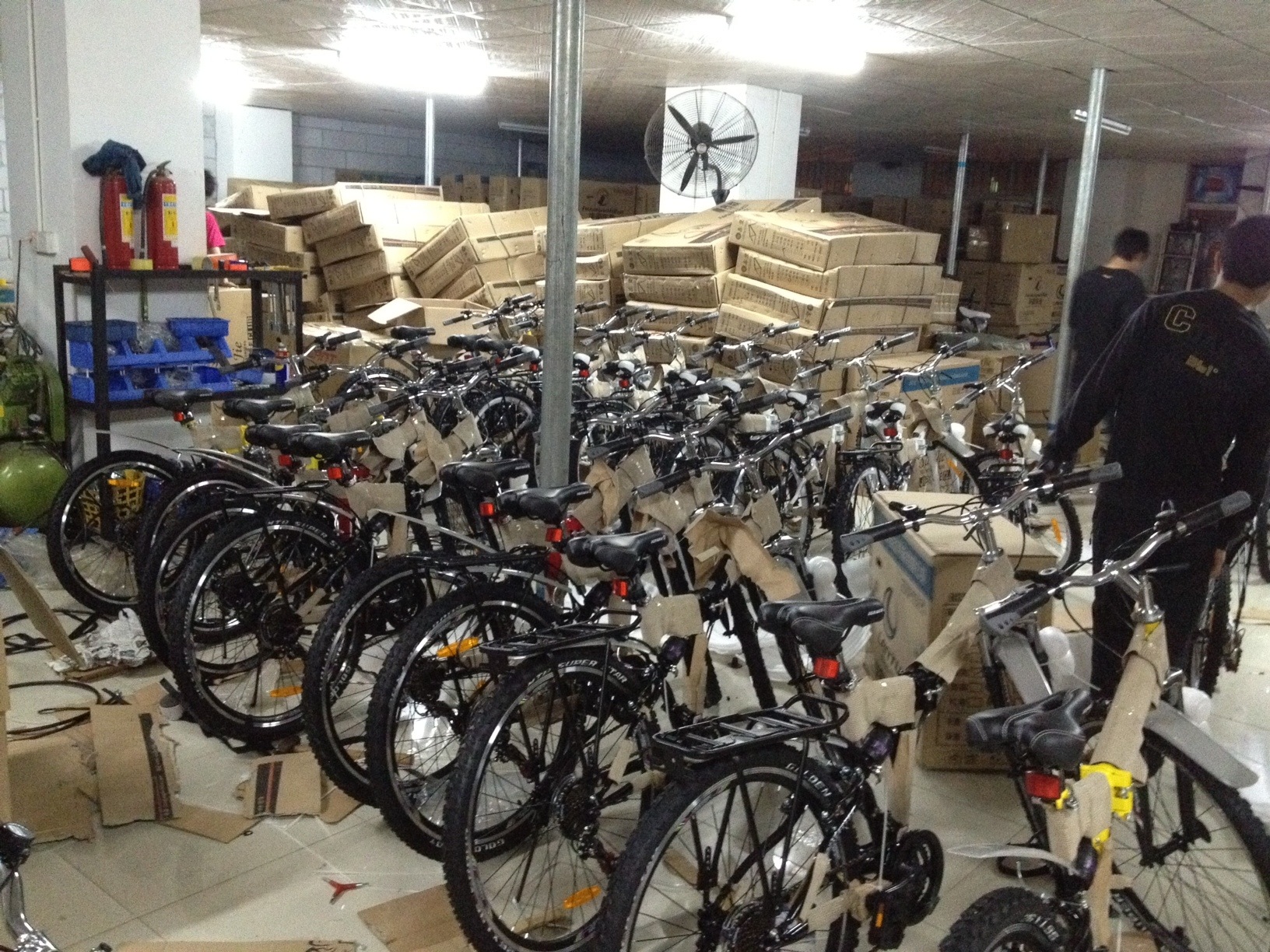 Here are two young entrepreneurial guys who have a passion for both business and cycles and they have started a great little business from scratch moving something like 90 bikes a day. Its a little ghetto set up and totally grass roots. Sure he has low margins but he is turning over pretty big numbers with very cheap labour to boot. That coupled with low shipping fees, no very very consumer sided eBay rules like we have in the UK and a massive domestic market means this looks pretty attractive.

So here I am sitting looking at some low cost made in china bicycles wondering if I really have to ship them out of china? The cogs are turning…..